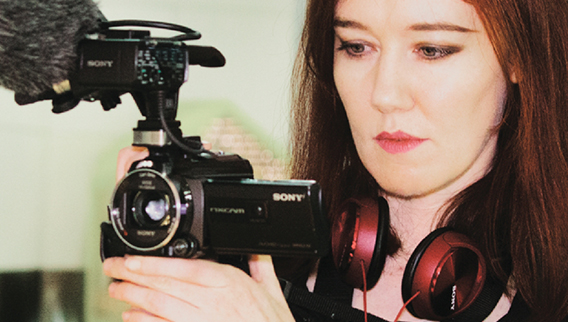 In a film industry dominated by male-made escapism, women documentarians are making sure that women’s voices and real experiences are part of the conversation. Documentaries have always been a crucial way to get information out about media neglected issues and lives, and since the advent of film women have picked up cameras to document the feminist tumult happening around them. Women have in fact been integral in the formation of the documentary genre itself, with veterans like Martha Ansara, Pat Fiske, Margot Nash leading the way (all of who screened at Sydney Film Festival this year as part of the feminism and film segment). Today women are pushing the boundaries of the documentary form by taking on daunting, large-scale topics and exploring them through intimate, relatable stories.

Still, making these documentaries – like many endeavours focusing on women – is very hard to fund. Sobering figures from Screen NSW report that in the period between November 2015 and November 2016, only 37% of documentary and factual directors were women in Screen NSW supported or funded projects. While this has improved from previous years, there is still a large gender gap to cover in this field.

Women documentary filmmakers are otherwise undaunted, believing deeply in the importance of the stories they are telling. By engaging innovative, grassroots initiatives, crowdfunding and partnering with philanthropic organisations, directors are able to give their films lives beyond the festival circuit. To support female documentary filmmakers based in NSW we recently established SheDoc, a substantial grant giving three documentarians the means for further research and development and also for attachments to experienced mentors and travel. We checked in with the inaugural recipients, Justine Moyle, Gemma Quilty and Georgia Quinn, about SheDoc and their passion for storytelling and social issues.

What first drew you to documentary filmmaking?

Gemma: I had a calling to make documentary films. I was first introduced to filmmaking while doing art direction for my friends’ films in Western Sydney. I was always inspired by the region and the people around me, so that is where I began, in my own backyard, making films about my friends and neighbours. I was introduced to documentary while studying Visual Communications at Western Sydney University. I loved documentary photography and wanted to capture life as it was, intuitively and in the moment.

Georgia: The prospect of a career in documentary filmmaking came to me quite out of the blue after I’d finished studying an undergraduate degree in International Relations and Anthropology. I was interning in social justice and policy development, and frankly just found the work unengaging (thus I have a lot of respect for people who do it). I was conflicted because I knew I was working in a field that I was passionate about, but I’d quickly realised that doing office work every day was not for me. At that stage, I reflected on what tools had been impactful in shaping my worldview and introducing me to new ideas. I quickly realised that the documentary had been hugely influential in this – film is such a powerful medium to introduce you to people that you’d never otherwise encounter, and to make complex ideas digestible. I also just have a pretty insatiable curiosity about a wide range of topics, and holding a camera gives you a pretty good excuse to ask obscure questions and explore new ideas.

Justine: Since before time began humanity has wanted to tell stories. There’s something in seeing what’s out there is not that different from what’s in here. I can’t say exactly what it was that first drew me to film making however I think ultimately for me it was understanding that each one of us has a story to tell and at the core of that is human vulnerability, fragility and mortality. To tell stories both validates our existence in the moment and in the future as a legacy.

What social issue(s) are you passionate about and why?

Gemma: I am passionate about so many social issues. But what I feel I can bring, due to where I live in South Western Sydney and the racial tensions in the world, are multicultural stories that reflect the region. With an aim to contribute to social cohesion, to counter marginalisation and encourage unity. Western Sydney is one of the most multicultural places on the planet and I believe observational documentaries are a powerful way to combat the often negative discourse the area receives and reflect our shared humanity.

Georgia: I suppose that my strongest passion is for refugee rights, partly because I have a lot of wonderful friends who are refugees but mostly because disregard for refugees (particularly in Australia) is such a flagrant and mind-boggling dismissal of human rights. I think a lot of people don’t realise how quickly the political climate of a country can shift and how people, just like us, could become displaced – if I were born somewhere else I could very easily be facing decisions like “should I get on this boat?” I did nothing to deserve to be born in Australia other than be very lucky, and I don’t see this as grounds to decide whether someone else can live in peace. This is particularly ironic considering the ancestors of the majority of people who don’t support refugees came here by boat themselves and displaced the true owners of this land. As such, I am also passionate about a future that sees a return of decisions about Aboriginal issues being made by Aboriginal people, and a national recognition that sovereignty was never ceded. I am also, of course, passionate about gender equality because – well, it’s 2017 and why are middle-aged men the ones who govern most of the decisions about my body?

Justine: I find myself being drawn to issues around equality and identity. Particularly for women. I am also drawn to looking at those that are making a change or taking a leap of faith and telling that story to inspire others to show that it’s not all doom and gloom. At the moment there’s a real negative spin on most things in the world. People need to hear stories of hope or it all gets too much and they give up before they get started.

What is your all-time favourite documentary? What makes it a standout for you?

Gemma: The first documentary that had an impact on me at a young age was The Story of the Weeping Camel. I was moved by the story and wondered about how it was made. A documentary film that had an emotional impact on me recently is Tom Zubrycki’s Molly and Mobarak. I saw it during his Masterclass at AFTRS and cried at the end. He was able to capture intimate moments and create a strong emotional connection with the audience in a subtle observational film. Another observational film I admire is Amin Palangi’s Love Marriage in Kabul, produced by Pat Fiske. I saw it at the Persian Film Festival – an inspiring and immersive film that takes you on a journey.

Georgia: That changes all the time! But a film that I constantly find myself returning to is Kirsten Johnson’s Cameraperson. It was made by editing together off-cuts of stories Johnson’s shot during her illustrious career, intermingled with personal footage, weaving this beautiful and intimate autobiography. Women are so underrepresented in cinematography, so it is a very inspiring film for me and continues to be so.

Justine: The Crash Reel by Lucy Walker is one of my standouts. It’s a well-crafted story about incredible courage told through warm, very real people. To have worked so closely with the family over the years of Kevin’s recovery and watching him face the limits of his injuries was incredibly compelling and confronting. It stands out to me for all these reasons.

How will SheDoc help further your career? Do you have any new ambitions now thanks to the grant?

Gemma: The SheDoc fellowship is a wonderful opportunity which has already opened doors including working with experienced documentary filmmakers, being invited onto the Ozdox committee and expanding my networks with Western Sydney collectives. Whilst completing current films, SheDoc will allow me to develop new projects and support other emerging filmmakers. I feel very honoured to be a part of it.

Georgia: One of the biggest mysteries that remained for me after I finished film school was how does one build a sustainable career from filmmaking? SheDoc will allow me to accompany documentary filmmaker and journalist Yaara Bou Melhem on overseas shoots for broadcast – a woman who has managed to build a successful international career through storytelling. I came across a story Yaara did early last year and contacted her out of the blue online. She was living in Lebanon at the time, but kindly spoke to me, and I soon began working for her, first transcribing and then as a researcher. Having the opportunity to actively observe and be involved in her storytelling process will be invaluable for me in learning how to operate in a professional context.

Justine: SheDoc is an incredible opportunity that will help me bridge the gap from producer to director. I have forged my own path for so long that I have got to a point where I have looked around and thought to myself- “I really need some guidance in taking this next step and who has been here before who can help show me?” It’s strange to realise you might need help and guidance! So, this is really a dream come true in many ways to have that opportunity to work with an acclaimed director making films that make a difference. The grant has really given me that extra validation I needed, to know that I can resolutely and confidently add Director to my title.

Are there any words of advice you’d give to other women considering a career in documentary filmmaking?

Gemma: Just do it! When an idea for a film takes hold of you, start filming and follow your instincts. Connect with other filmmakers and when you have a documentary you’re ready to pursue, seek out a producer whose work you admire. I was shocked to see the Screen NSW statistic that women only make up 37% of documentary filmmakers.

Georgia: It’s a bit early for me to say, but I’d suggest – be curious, approach strangers, and find good mentors.

Justine: The advice I would give to any woman in filmmaking is to give it a go. No matter where you come from, what you do, how old you are or what you did before. We all have stories to tell and the only way to tell them is to just do it. It doesn’t have to be perfect it just needs to be done.