The Philippines is the deadliest country in Asia for land and environmental defenders. If we can’t defend the people protecting the land, then how can we protect the land itself?

With a total of 29 killings in 2020, the Philippines is the deadliest place in Asia to be a land and environmental defender.

Illegal logging is an issue that is having a devastating impact on the ancient forests of the Philippines. The practice contributes not only to deforestation and a loss of biodiversity but also frequently leads to violence and crime.

Despite the Philippines government instating laws against illegal logging and dedicating task forces to apprehend violators, the combination of corruption within leading bodies as well as the lack of funding and autonomy for these task forces ensures that they remain powerless, and that the destruction of the Philippines’ ancient forests continues. 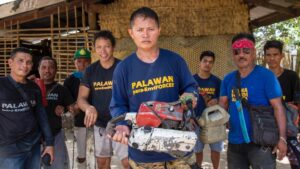 As a result, NGOs like the Palawan NGO Network Inc (PNNI) are forced to sacrifice their own lives to defend the land.

Only last year in an event referred to as ‘Bloody Sunday’, the Philippine National Police and Philippine Army raided Indigenous villages and attacked unarmed environmentalists, leading to 9 deaths and 6 illegal arrests.

“If we cannot protect the people defending the plant. How are we going to protect the planet”- Ben Leather, Global Witness

The documentary DELIKADO directed by Karl Malakunas and screened at the Sydney Film Festival follows Bobby Chan, a local environmental lawyer and director of the PNNI, Tata, a PNNI member and local Mayor Nieves Rosento in their quest to protect their land.

The film follows members of the PNNI as they embark on missions to apprehend illegal loggers and confiscate their equipment. It highlights just how dangerous it is for environmental crusaders, risking their lives each time they embark on one of these missions.

According to the PNNI, 12 of their members have been killed since 2001.

Bobby Chan, the director of PNNI, rarely leaves his compound due to the multitude of death threats, some of which have been publicly broadcast by political figures such as Jose Alvarez, the governor of Palawan. Chan’s wife and daughter have been forced to move to Manila for their protection.

Who else will do this? No one else right? We are the only ones. Only a few of us are doing this, so it’s really hard. This is the government’s job. Why are we the ones having to do this? It’s gruelling. We are sacrificing our lives here”- Tata, PNNI

The boom of tourism in the Philippines is one of the main drivers for illegal logging.

Jose Alvarez, the Governor of Palawan is one of the benefiters of the tourism boom, owning hotels and real estate on the island of Palawan. Some of his controversial developments have reportedly been approved by the Palawan Council for Sustainable Development (PCSD), which Alvarez himself chairs.

The governor’s brother, Antonio Alvarez, is another businessman who benefits from the boom in tourism, being the largest shareholder of a company that owns opulent hotels in the Philippines. Global Witness has evidence which shows illegal timber entering Alvarez’s company’s hotel while under construction.

And it doesn’t stop there. In the report Defending the Philippines, Global Witness outlines other businesspeople who benefit from the tourism industry and are connected to illegal logging.

Global Witness urges tourists to encourage a new tourism culture that is centred on ethics, by questioning hotels about the origin of their timber and demanding proof that it has been sourced responsibly.

The onus relies on us to ensure that we are not inadvertently contributing towards the violence against land and environmental defenders by supporting businesses that are connected to corruption and illegal logging.