One man’s grueling walk to heal a nation. He will make history, but can he make lasting change?

Alwyn Doolan is a young Gooreng Gooreng Wakka Wakka man attempting the longest walk in modern Aboriginal history: from the tip of Queensland via Tasmania to Canberra, to deliver a message of healing to the Australian Government. Raised on an Aboriginal mission, Alwyn suffered from severe identity crisis and addiction, surviving only by reconnecting to his culture. Now, he is determined to bring his story of healing to the nation, and promote integrating Aboriginal lore into the modern Australian system. Chosen by his Ancestors to carry Message Sticks as a form of Aboriginal diplomacy, Alwyn is named ‘Wunyungar’ (Messenger).

Walking through 50 First Nations across 8,000kms, Wunyungar collates a vision for a ‘New Dreaming’ to bring black and white together, restore truth, unite and heal. His three Message Sticks articulate Australia’s story in three stages: Creation, Colonisation and Healing. But will he be heard?

Once arriving in Canberra, trying to get his message across proves more challenging than he thought. A motion is tabled for the Government to accept his Message Sticks, splitting parliament 50/50. Meanwhile, he becomes hospitalized from the sheer trauma of his walk, forcing him into a wheelchair. When the Prime Minister ultimately ignores him, he feels helpless. Wunyungar begins to feel increasingly diminished and disempowered.

Disillusioned, Wunyungar decides to return home. There, he joins his community on a memorial walk to retrace the steps of their relatives who were stolen as children. Wunyungar’s return brings strength and inspiration, and together they walk side-by-side, healing their past.

Having walked across the nation, it is only once he returns home that Wunyungar discovers what he set out to find. He has a vision: imagine all Aboriginal nations dancing on country as 'one in time’? His vision goes viral and the first ever Nation Dance is born, uplifting and inspiring thousands of Australians nation-wide. 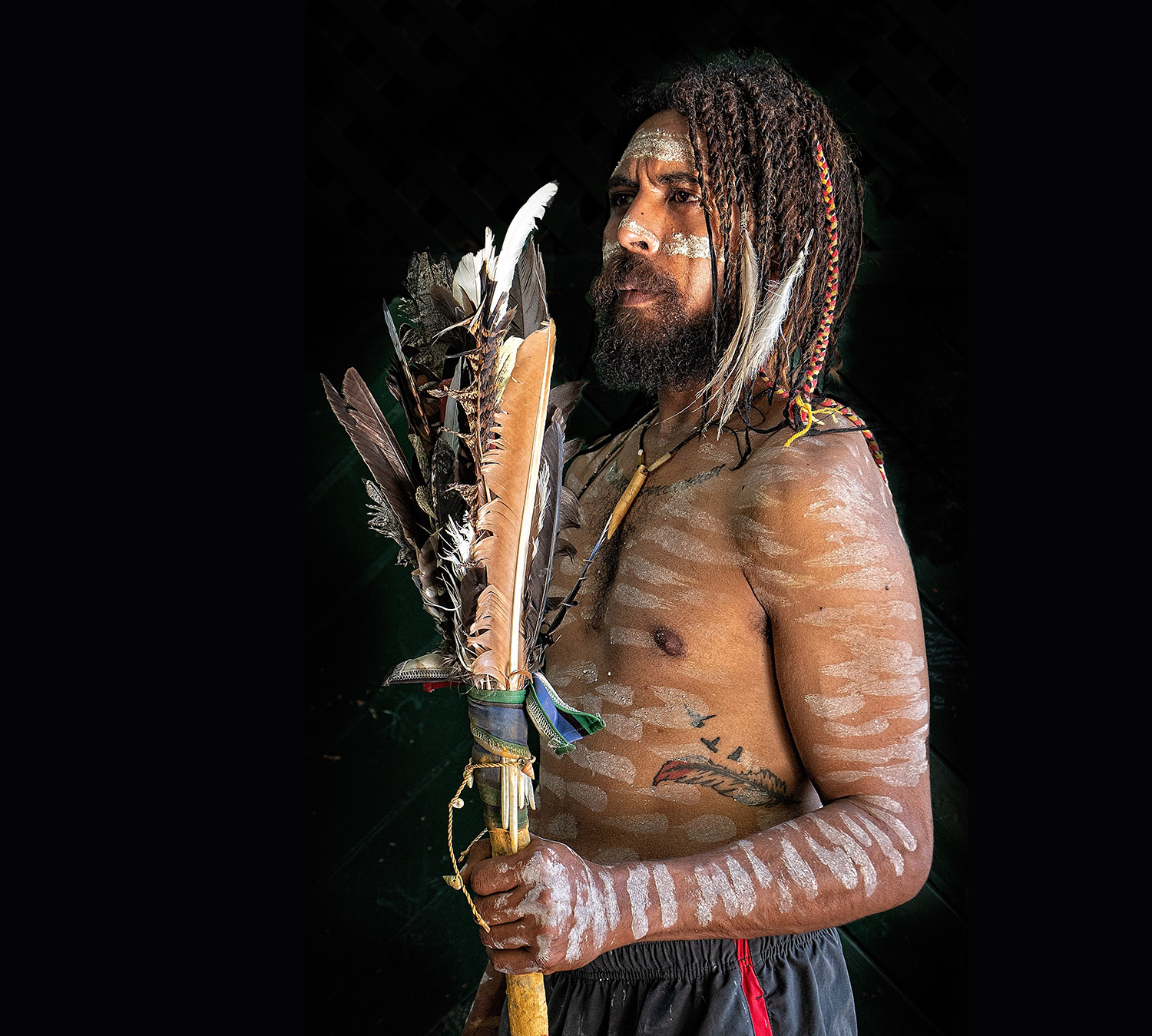 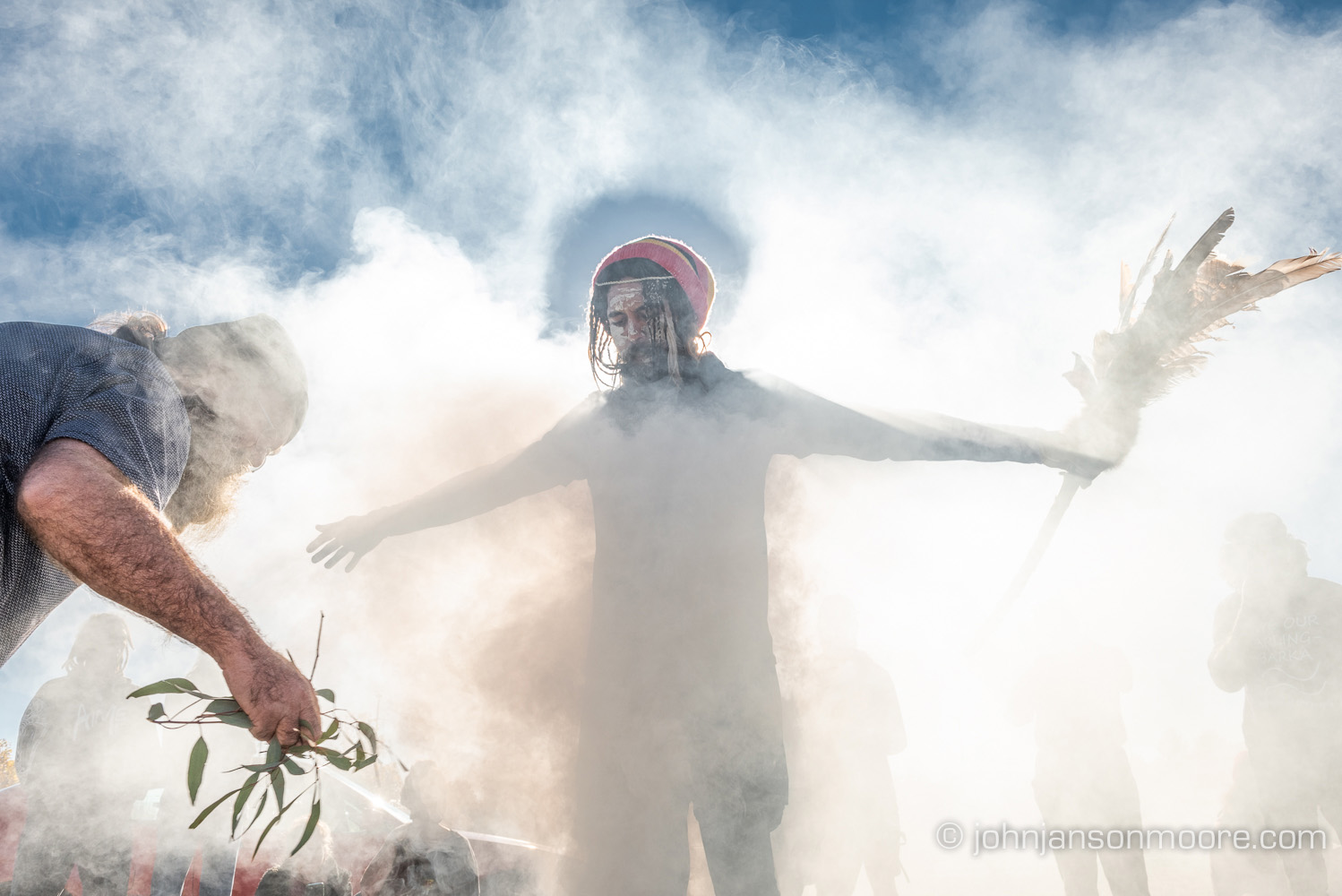 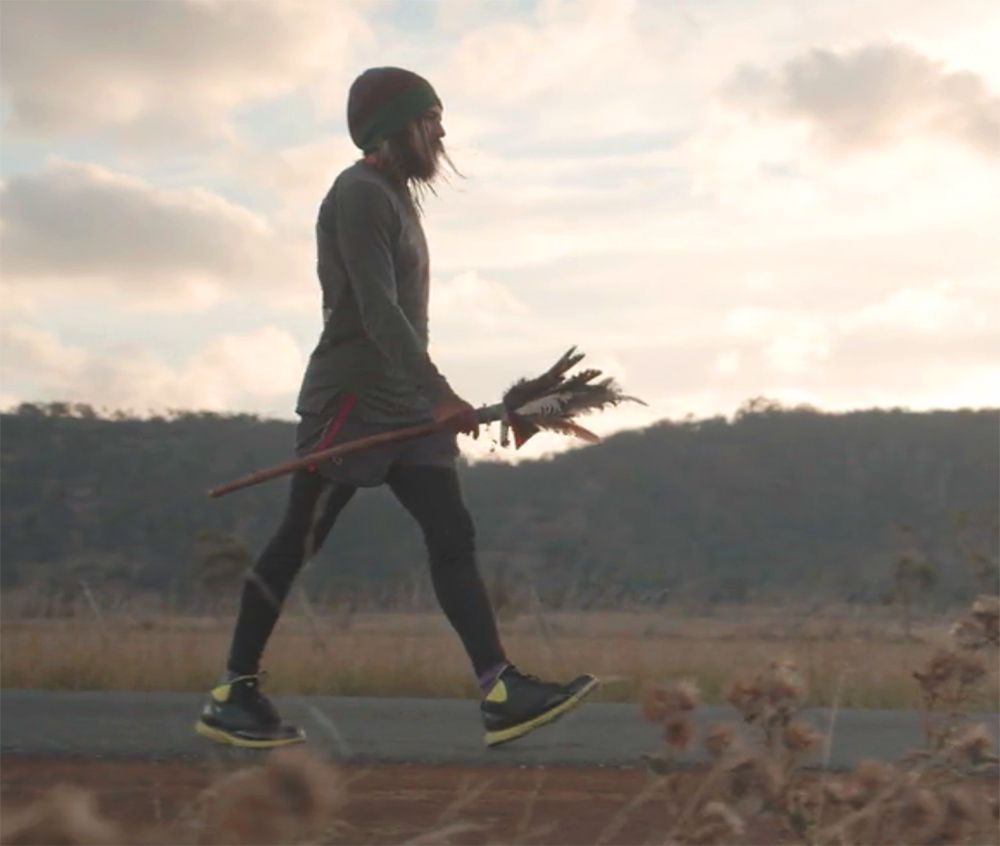 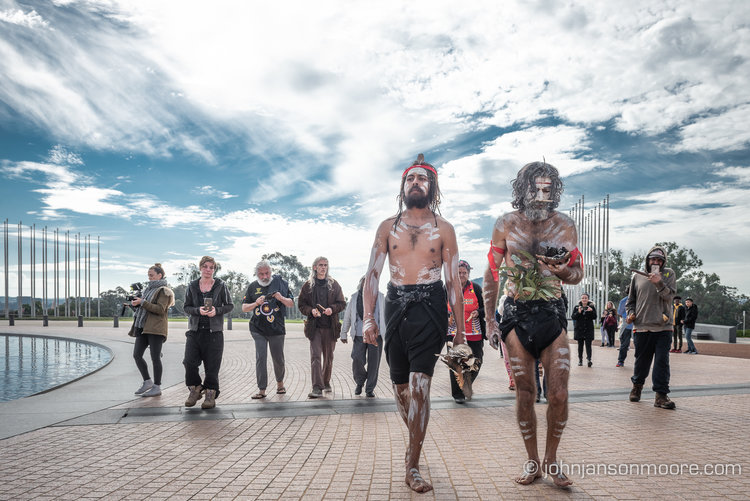 Colonisation has inflicted incalculable decimation of Aboriginal cultures in Australia, leading to generations of trauma, anxiety and disorientation that affects Australians of all backgrounds today. This is the unhealed wound of Australia’s past. Alwyn Doolan is a Messenger chosen by his Ancestors to bring forth a vision for how Australia can heal this wound and unify its divisions. This film showcases Alwyn’s experience and insights from walking through 50 Aboriginal sovereign nations, immersing himself deeply in the landscapes and communities of Australia's eastern frontier. His story inspires a new appreciation for Aboriginal methods of healing, connection to land and spirit - knowledge which has survived over 120,000 years. This film seeks to inspire both Indigenous and non-Indigenous Australians about how we as individuals can heal ourselves, and our collective wound, by reconnecting to our cultural heritage, going within, and uniting our own unique and powerful voices.

The film’s impact vision is three-fold. We aim to create widespread awareness and appreciation of Aboriginal cultural healing practices, including their benefits for non-Indigenous Australians. Inspire self-empowerment, healing and increased engagement of young people with Aboriginal culture. Inspire a national movement amongst Indigenous and non-Indigenous Australians to take social change into their own hands, without relying on government or institutional reform to lead the way.

1.
Increased awareness and appreciation of Aboriginal methods of healing, that can benefit all people.
A deeper understanding about the meanings of Voice, Treaty and Truth.
Motivation to initiate self-healing and create change on an individual and local level.

3.
Permanent change to the Australian Curriculum of Education to tell the whole truth of Aboriginal history and colonisation.
Sacred memorial fires established in towns and cities around Australia to honour the traumas inflicted.
400+ First Nation Sovereign Peoples come together to organise leadership that can take responsibility for making decisions on behalf of Indigenous Australians with the Australian Government.

We will create a comprehensive film website through which anyone can host a film screening, initiate a smoke healing ceremony or advocate for a sacred memorial fire to be held in their community.

We will organise a tour of screenings accompanied by Alwyn to host a Q&A with the audience. This will transform each screening into an ‘event’ to further inspire conversation and action.

Through ATOM, we will create educational packages with e-learning modules for primary, high schools, colleges and universities to further the reach of our impact goals to the youth of today and the youth of tomorrow.

We will contact all influential organisations, special interest groups, individuals and advocacy groups operating in the sphere of Indigenous affairs, First Nations law and rights, policy development, reconciliation, Voice/Treaty/Truth etc, to offer them the film to show to their community and create their own event.

The Woorabinda Shire Aboriginal Council in Alwyn’s hometown of Woorabinda, central Queensland, have played an important role in the film's development. They championed self-determination and self-healing through carrying out the 92nd biennial Taroom to Woorabinda Memorial Walk entirely independently. This footage constitutes a key chapter in the film. We will continue to work with them as we prepare to release the film publicly and engage with community in the central Queensland region.

We have support of the Gehgre Aboriginal Corporation via chairperson Uncle Richard Johnson, Gooreng Gooreng Nation Elder. They have invited us to document a large-scale healing ceremony on Gooreng Gooreng country, to be potentially included in the documentary.

During Alwyn's walk he met and engaged with a very diverse range of people and organisations who've supported his project. As we prepare to launch the film publicly, we will be leveraging their support & including them in our outreach strategy.

1. Host a screening
2. Facilitate a smoke healing ceremony
3. Host a Nation Dance
4. Initiate a memorial fire in your regional capital
5. Download and implement the educational package
6. Share the film and message on social media

We will track screenings conducted and compile a list of organisations and groups who the film has reached. We will then follow up with these groups to seek feedback on how the film has impacted their community, and if they wish to act further on the 6 calls-to-action.

In the film website we intend to create a pin drop map function that shows all the locations where smoke healing ceremonies and Nation Dances have been held. This can include further information such as photos, testimonies and links. The website could become a comprehensive record of the film’s outreach and impact. When healing events and screenings are recorded from locations all over Australia, then we’ll know the film has reached its Medium Terms Goals. We can also track growth of the private ‘Nation Dance’ Facebook group which already has 21K members, started by Alwyn.

Through monitoring national media and social media we'll track how much conversation has grown around the themes of the film.

Human Nature got us into this mess, and only human nature can get us out of it!
VIEW PROJECT