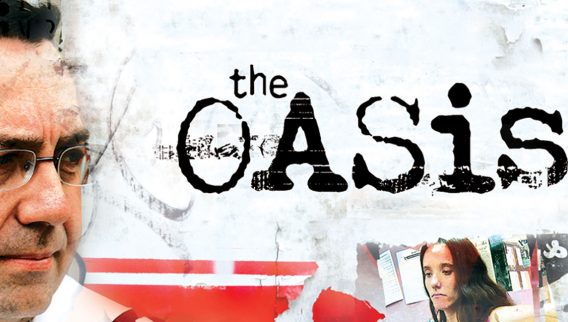 The heartbreaking stories of vulnerable young people in an attempt to raise awareness of the issue and motivate the community to call for action.

Tough kids from tough backgrounds living dangerous lives – these are the young people of Oasis, a youth refuge in inner-city Sydney. No story is too horrific, no circumstance too dire, no kid too damaged for its tireless director, Captain Paul Moulds.

Father figure, counsellor, saviour, and an orphan himself, Paul is nothing short of a legend amongst those who stumble in at breaking point with nowhere left to go. Only Paul is there through all the chaos, from the birth of new babies to the funerals of those who self-destruct prematurely.

Filmed over two and a half years, The Oasis is a raw observational documentary that charts the fraught lives of Paul’s charges, and captures his daily battle to save these lost children of the so-called ‘lucky country’.

The Oasis documentary educational resources and study guides have been developed to support the film, all accessible free of charge. Supporting the Health and Physical Education and English curriculum areas for years 9 & 10, as well as additional general resources focussing on the issue of youth homelessness. There are also additional short films featuring characters and events that weren’t included in the final movie.

The Oasis’s Activity and Worksheets

• Homeless young Australians, and those organisations and individuals who help them, deserve increased government and community support.

• Put the issue of youth homelessness back on the national agenda.

• The Australian federal and state governments.

• Website: Launched in the weeks prior to the film’s premiere television broadcast, The Oasis website contained the film trailer, a synopsis of the film, an online forum for public discussion on youth homelessness, a resources section for educators, and a help section for young people affected by issues including homelessness, drug and alcohol addiction and mental health problems.

• Study guides: Following the first broadcast of the film, The Oasis team turned their attention to educational outreach, and developed a range of study guides to be used by teachers and secondary students throughout Australia. The first study guide was comprehensive, and could be used by secondary students studying health and physical education, community development, society and environment, and religion. Subsequent study guides were mapped specifically to the English and Health and Physical Education areas of the Australian secondary school curriculum.

• Summary Reports of the National Youth Commission’s 2008 report on Australia’s homeless youth: The National Youth Commission’s landmark report on youth homelessness in Australia was released at the same time as the film, and its findings tied in well with the film’s goals of increasing government and community support for homeless youth and youth homelessness services. A summarised version of the report therefore became a key asset of The Oasis campaign. The Oasis team sent Summary Reports to all state and federal government ministers in Australia, and to many private welfare agencies.

• Philanthropy packages: Also during the initial outreach phase of the campaign, 350 DVDs of the film, and 350 copies of the Summary Report of the National Youth Commission’s landmark homelessness report mentioned above, were distributed to the major philanthropic organisations in Australia. This was to prompt increased philanthropic support for youth homelessness organisations.

The Oasis screened on ABC on April 10th 2008 during National Youth Week. The premiere screening also coincided with the launch of the National Youth Commission’s Report on Australia’s homeless youth.

In collaboration with ABC Publicity, The Oasis’s production company, Shark Island Productions, coordinated an Australia-wide public relations and media campaign to generate publicity around the premiere broadcast and the issue of youth homelessness. The public relations firm Hootville also assisted in generating coverage across television, newspaper, magazine, radio, and trade publications, in the weeks leading up to the broadcast.

In the weeks leading up to the broadcast, Shark Island Productions also constructed a major interactive educational website on youth homelessness, which is an ongoing resource.

The premiere broadcast was presented on air by Tony Jones, an eminent ABC television journalist, and Jones also hosted an on-air panel discussion after the broadcast. The panelists gathered to discuss youth homelessness, addiction, mental health and family breakdown were Tania Plibersek, the Minister of Housing, David Eldridge, Commissioner of the National Youth Commission, Rhonda Galbally, an internationally-renowned community advocate and founding CEO of VicHealth, and Paul Moulds from Oasis.

The publicity campaign executed by Shark Island Productions, Hootville and the ABC delivered an audience of over a million people for the premiere broadcast, and generated thousands of emails to The Oasis website’s online forum after the broadcast.

Following the broadcast, an education package comprising The Oasis on DVD, and a comprehensive study guide for teachers and students, was donated to 3200 secondary school in Australia. The study guide was generated by the Australian Teachers of Media. Shark Island Productions, with assistance from interested foundations, covered the costs of the production of the DVD and study guides, their duplication, the cost of the distribution service and postage.

The launch of the education package also coincided with a screening of The Oasis in Federal Parliament, with distribution of a Summary Report version of the National Youth Commission’s Youth Homelessness Report to all attendees.

Following this, full versions of the National Youth Commission’s Youth Homelessness Report was also distributed to all levels of government and private welfare agencies by Shark Island Productions. Similarly, Summary Reports were distributed to all state and federal ministers.

Furthermore, Salvation Army screenings of The Oasis were held at the 200 Corps offices/halls around Australia for the local community.

In 2011, The Oasis Youth Homelessness Schools Competition was launched by patron Cate Blanchett. An Oasis school liaison position was also introduced, with the liaison visiting schools around the country to raise awareness about youth homelessness, and to encourage school students to take action around the issue.

In 2013, the Salvation Army Youth Ambassador Initiative began. Guided by the documentary, the initiative engages young people around the issue of youth homelessness through leadership development and support.

• Increase in media coverage around the issue of youth homelessness in Australia.

• Increase in political support for homeless Australian youth and increase in funding for youth homelessness services.

• Increase in community awareness regarding the issue of youth homelessness in Australia. This was measured through a survey, primarily distributed to schools.

• Change in community attitudes towards homeless youth and the issue of youth homelessness in Australia. This was also measured through a survey, primarily distributed to schools.

• The Oasis documentary and the National Youth Commission’s Report on Australia’s homeless youth generated hundreds of reports on radio, television and print media. It is estimated that television coverage on the issue of youth homelessness across all networks reached more than 8 million Australians.

• The film has also had an attributable impact in terms of increased community support for homeless Australian young people. The Salvation Army’s 2008 Red Shield Door Knock Appeal, which occurred directly after the premiere ABC screening of The Oasis, raised 10.5% more than in the previous year.

• Australian businesses have also demonstrated increased support for the Oasis centre in Surry Hills: Property Plus Group began employing some of the young people from Oasis, and in 2009 the Foxtel Foundation commenced its film, music and media training program for youth from the Oasis Youth Support Network. The Australian Centre for Photography also commenced an annual program for youth from The Oasis Support Network from 2009.

• Carrying on from the success of The Oasis campaign, the Salvation Army launched a major public awareness campaign on youth homelessness in September 2009, which is now called The Couch Project.

• Awareness and support among school students has also increased. A recent (2013) survey of secondary students on youth homelessness indicated that over 60% out of 417 respondents feel inspired to make a difference, over 50% learned about the definition of homelessness and its effects on young people, and over 40% wanted to either donate, volunteer or spread the word.

• Bee Orsini, the first Oasis School Liaison, was in 2012 was named in the Australian Financial Review and Westpac “100 Women of Influence Australia” list for her work on the schools engagement program.