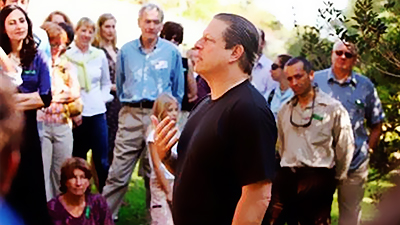 Seven Australians personally trained by Al Gore stand up and talk to their respective communities about the societal and environmental issue of climate change.

Telling the Truth is a documentary which tells the story of seven Australians personally trained by Al Gore in November 2006 to be Climate Project presenters, as part of the initial roll-out phase of the Climate Project Australia. The film follows the presenters’ journeys over the subsequent six months as they stand up and talk to their respective communities about the societal and environmental issue of climate change, using Gore’s landmark climate change presentation as an aid.

Weaving science and personal narratives, the film both explains Gore’s vision, and follows the Australian presenters who are making it a reality – and while their personal stories are being revealed, the compelling science and underlying urgency to act on climate change steadily builds.

Climate change is often presented in the media as such an insurmountable, global issue that ordinary people feel discouraged from acting on it. They feel any contribution they make would be invaluable or pointless in the face of such a large-scale problem. Telling the Truth is designed to powerfully counteract these ideas: through introducing a range of everyday Australians who have taken significant action against climate change, the film encourages everyday viewers to recognise that any contribution they make will be significant, too. The film emphasises that we all have a responsibility to act on climate change, and that every action, no matter how small, still helps.

• Climate change is one of the most pressing issues facing our world today. We must take urgent action to counteract it.

• Through individual and collective action, everyday people can have a significant impact on the issue of climate change.

• There are many easy ways for everyday people to take action against climate change.

The campaign’s major partner was the Australian Conservation Foundation, a national environmental protection group focused on advocacy, policy, research and community organising. The group has over 400 000 members and has been a powerful voice for the environment since 1965.

In keeping with the message of the film, which emphasises the role everyday people can play in acting on climate change, supporters of both the fledgling Climate Project Australia and the Australian Conservation Foundation, along with the supporters of other partner environmental groups, were invited to become advocates for the film, in turn using it to catalyse change in Australian communities. These supporters were encouraged to host screening sessions of Telling the Truth in their communities.

The Australian Conservation Foundation also assisted in distributing the film on DVD, through asking people who were passionate about climate change action to apply to become a Connector for Change. Connectors received Telling the Truth on DVD, and had access to a purpose-built website where they could download instructions and support material on how to host a community screening of the film. Using the website, they could also give feedback on how their screening was received.

Connectors held screenings in their workplaces, sporting clubs, schools and town meetings, and people in the audience were also encouraged to join in and become Connectors for Change. To encourage further engagement, The Telling the Truth team also featured an SMS number at the end of the film, which people could text for more information about how they could become involved in the fight against climate change.

As of 2008, the Telling the Truth/ Climate Project Australia team were aiming to arrange or encourage 1000 screenings to be held by December 1st 2008, and a longer-term aim of 1209 mini-Climate Change Projects, born from Connector screenings, to be up and running by the Copenhagen Climate Change Conference in December 2009.

• Number of people signing up to be Climate Project presenters and/ or Connectors for Change.

• Number of Climate Project presentations given.

Since the Climate Project began in Australia in November 2006, 250 Australians have signed up to be Climate Project presenters. They have become voices in their communities and peer groups to assist in significant and timely behavioural change, and to help solve the greatest challenge of our time – climate change.

In the first 17 months of the Project, these Climate Project presenters – mums, accountants, priests, school students, firemen, comedians and GPs – have made 125,000 presentations throughout the country.

Since the Climate Project began in Australia, nearly one in 100 Australians have welcomed the opportunity to attend a presentation and engage in an informed and open discussion with one of the 250 trained Climate Project presenters.