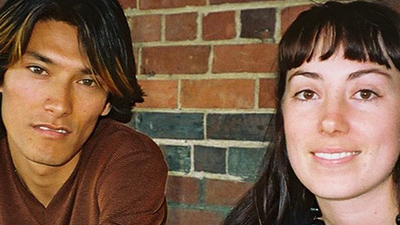 The story of Mobarak Tahiri, a young Afghani Hazara refugee, falls in love with Molly. A delicate tension as the hopes and uncertainty of the relationship between Molly and Mobarak run parallel.

Molly and Mobarak is the story of Mobarak Tahiri, a young Afghani Hazara refugee, who is living in the town of Young, in rural NSW. Categorized as an illegal immigrant by the Australian government, Mobarak was initially detained in the Curtin Detention Centre near Derby, WA, before being granted a Temporary Protection Visa (TPV) that allowed him to live and work in the general Australian community and then return home once the visa expires. Mobarak’s life becomes even more complicated when he falls in love with Molly, a teacher at the local high school. The film creates a delicate tension as the hopes and uncertainty of the relationship between Molly and Mobarak run parallel.

Director Tom Zubrycki says this about why he decided to make the film: “I set out to begin making this film in 2002 with the aim of putting ‘a human face on the refugee situation in Australia’. I wanted to pursue the themes of human rights, refugees, racism and rural communities in a compassionate and thought-provoking way. The government at the time had a tendency to vilify asylum seekers, calling them “illegals, boat people, queue jumpers” and other derogatory terms, and I felt the film I was going to make would play a significant role in humanising refugees and asylum seekers.”

• Prompt the Australian public to advocate for better government treatment of refugees and asylum seekers.

• Prompt the government itself to reform their attitudes and policies towards refugees and asylum seekers.

The film’s major partners were Amnesty International Australia and Rural Australians for Refugees. Both organisations organised screenings of Molly and Mobarak in country halls and cinemas across Australia.

“Molly and Mobarak premiered at Sydney Film Festival in 2003, and was then distributed to refugee support networks throughout the country. These groups, in particular Amnesty and Rural Australians for Refugees, organised screenings in country halls and cinemas across Australia.

The film has been seen by hundreds of thousands of people in Australia and overseas, in the US, Canada and Europe. Most people saw it on television, but others would have seen it at film festivals, in cinemas or in small group discussion screenings.

At all screenings the film resonated powerfully with audiences, especially in evoking strong sympathy for the plight of refugees. The film had a cinema season in Sydney and Melbourne and generated a lot of publicity in the media, especially in the national press. Articles were written about the film and also about the general plight of Afghani Hazaras on Temporary Protection Visas.

I believe the publicity surrounding the film fuelled a general concern already present within the community about the government’s unsympathetic and heavy-handed treatment of the refugees. Criticism was coming from both sides of the political spectrum. It ranged from political activists on the left of the Labor Party including Democrats like Andrew Bartlett, to National Party MP’s concerned about what would happen to rural industries like meat processing and fruit-picking that were so heavily reliant on refugee labour for their on-going viability.

The fact that the film had a critical part to play in this debate was confirmed for me when a request that it be screened by Tanya Plibersek, a Labor back-bencher, in Parliament House, Canberra was initially turned down.

The screening was refused on the grounds that the film was “critical of the Government’s policy, selectively quotes the Prime Minister and promotes the theme of widespread resistance to government policy,” according to Joint House Department executive leader Bob Wedgwood w on the advice of Speaker Neil Andrew. After the letter of refusal was leaked to the press, the ban was immediately overturned.

Molly and Mobarak is not a shrill political advocacy film, but by being a love story, it allows for the issues to emerge in a much more subtle way. The honesty, directness and intimacy produces an emotional affect on audiences which effects change in small and personal ways.” – Director Tom Zubrycki.

See campaign roll-out section for some of the major achievements in the eyes of Molly and Mobarak director Tom Zubrycki.