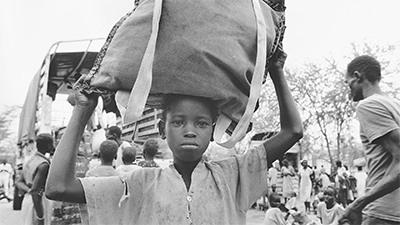 Two Sudanese refugees on an extraordinary journey from Africa to America, but find themselves confronted with the abundance and alienation of contemporary American suburbia.

Lost Boys of Sudan is an Emmy-nominated feature-length documentary that follows two Sudanese refugees on an extraordinary journey from Africa to America. Orphaned as young boys in one of Africa’s cruelest civil wars, Peter Dut and Santino Chuor survived lion attacks and militia gunfire to reach a refugee camp in Kenya along with thousands of other children. From there, remarkably, they were chosen to come to America. Safe at last from physical danger and hunger, but a world away from home, they find themselves confronted with the abundance and alienation of contemporary American suburbia.

The Darfur crisis was one of the most violent conflicts of the early 21st century, but it was not receiving the kind of widespread, worldwide media attention that would prompt significant overseas intervention, support and/ or aid. Public attitudes towards refugees stemming from the crisis, and refugees in general, were also questionable. It was in this environment that the idea for Lost Boys of Sudan grew: the filmmakers wanted to mobilise widespread action and support for Darfuri refugees and for the Darfur crisis itself.

• The humanitarian crisis in Darfur is one of epic proportions and the people of Darfur need urgent aid.

• Refugees have the same hopes, dreams, fears and worries as us; they are simply seeking peace and safety for themselves and their families.

• Deepen the public’s understanding about the humanitarian crisis in Darfur.

• Open people’s hearts and encourage a sense of solidarity with Darfuri refugees and refugees in general.

• Generate community and government support for the people of Darfur.

• Website: In the lead up to the film’s premiere screening on PBS in the USA, the Lost Boys of Sudan team launched a website containing additional information on the Darfur crisis and, a Take Action page full of ideas on meaningful ways for interested parties to support Darfuri refugees.

• Information pamphlets: Pamphlets containing information about the Darfur crisis, and listing ways for viewers to take action, were distributed at theatrical screenings of Lost Boys of Sudan.

Lost Boys of Sudan premiered nationally in the USA on the PBS series, POV, in the fall of 2004. It earned two national Emmy nominations and won an Independent Spirit Award. Millions of viewers tuned into the film’s broadcast on PBS, and refugee and human rights organisations across the country organised house parties, teach-ins and fundraising events on the night of the screening.

The filmmakers also launched a companion website, which contained additional information on the Darfur crisis and had a Take Action page full of ideas on meaningful ways for interested parties to support Darfuri refugees.

In the next phase of the campaign, the film was screened theatrically in 70 cities across the USA to strong audience and critical praise. Literature about the film and the Darfur refugee crisis was distributed in theatres during the film’s run.

The Lost Boys of Sudan team then focused specifically on 20 cities, and in each city organised a series of free public screenings to raise awareness and financial support for Darfuri refugees in collaboration with a wide variety of partners including rotary clubs, immigrant rights groups, racial justice organisations, faith-based groups, arts associations, and after-school programs.

Lost Boys of Sudan also screened on Capitol Hill to the Congressional Refugee and Human Rights Caucuses, as well as to the State Department’s Refugee and Migration Bureau.

The Lost Boys of Sudan team then donated 2000 copies of the Educators’ Edition DVD with discussion guides, lesson plans and community action kits to public libraries, teachers of English as a Second Language, high school and university student chapters of STAND and Amnesty International, for use in free public screenings and for continued educational use throughout America.

In addition to the donated DVDs, public libraries and student groups with especially powerful ideas for community events, received mini-grants and the assistance of the film’s Community Outreach Director to support their events around the film and crisis.

• Number of volunteers recruited for refugee and humanitarian organisations.

• Number of letters written to elected officials and the media about the Darfur crisis.

• Thousands of volunteers for refugee and humanitarian organisations recruited.

• The development of various letter-writing campaigns to elected officials and the media around the Darfur crisis.

• Funding and political action generated for the Darfur crisis.