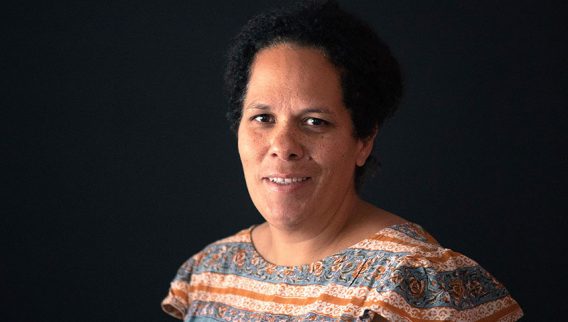 After a highly competitive selection process Tamara Whyte from Nhulunbuy, in the Northern Territory has been selected as the Inaugural Fellow!

As part of the “Centralised” initiative, Documentary Australia Foundation (DAF)’s Indigenous Fellowship supports the professional development of Indigenous documentary filmmakers who are resident in the Northern Territory or South Australia.

The Fellowship, which provides up to $30,000 to the selected fellow, is a contributing partnership between the Documentary Australia Foundation (DAF), Screen Territory, the South Australian Film Corporation (SAFC), National Indigenous Television  and the Australian Film Television and Radio School (AFTRS Indigenous).

It is also supported by innovative philanthropic partners – Aesop Foundation, Fade To Black Foundation and Resolve Litigation Lawyers – who provided the startup grants that allowed us to launch this new initiative.

“This opportunity is a game changer. As a carer, parent and Aboriginal woman working in film and media, the ability to craft my own professional development pathway is an essential opportunity to move forward. The lives of carers are unique and nuanced and so are our professional development needs. Thank you. I’m excited to be able to undertake this fellowship and be able to engage further with documentary making”

Tamara Whyte will now undertake a year-long bespoke fellowship with the funds, in addition to $10,000 in kind support in skill specific training at AFTRS. The objective of the fellowship is to enable professional development to Tamara as she develops her documentary concept Base 8, a project that explores the use of mathematics in Indigenous Culture.

“We are thrilled to be able to support Tamara Whyte’s career and vision for her fascinating projects. Living remotely has challenges in terms of networking with the wider film industry, so we are happy to alleviate some of that distance with financial support, introductions and greater skills acquisition. We are also very interested in Tamara’s ideas, particularly the documentary concept she is developing, which has the potential to introduce us all to a wide knowledge base connected to land, the universe and ancient cultural wisdom.”

“Congratulations to Territorian Tamara Whyte who has been awarded the inaugural Centralised Indigenous Fellowship. This Fellowship will assist Tamara to further advance her career through the broadening of skills, knowledge and networks, which she will bring back and contribute to the Territory. The Northern Territory Government is pleased to support the initiative to help Indigenous screen professionals like Tamara to continue to bring their unique stories and perspectives to the screen and the world.”

Launched in August 2019, Centralised is a ground-breaking initiative to boost Indigenous filmmakers and screen creatives in South Australia and Northern Territory with specialised funding, support and development opportunities.

Developed by Screen Territory and the South Australian Film Corporation & Adelaide Studios, together with collaborating partners Screen Australia’s Indigenous Department, Documentary Australia Foundation (DAF), AFTRS Indigenous (Australian Film, Television & Radio School), ABC and NITV, Centralised delivers a range of opportunities for Aboriginal and Torres Strait Islander screen creatives through the centre of Australia, creating clear pathways for emerging talent including mentoring, workshops, attachments and internships; the aim of which is to encourage screen storytelling, practitioner and audience development in South Australia and the Northern Territory, with an emphasis on collaboration that crosses state borders.

Documentary Australia Foundation’s Indigenous Fellowship has also been made possible through the generous supported of Fade to Black Foundation, Resolve Litigation Lawyers and My Timor Network.

“NITV is proud to be a part of this important initiative, supporting the development of the talent that exists across Australia’s remote regions and communities. At NITV, we’re committed to providing pathways and developing the careers of First Nations storytellers from across our country and sharing their stories and experiences with all Australians. We look forward to supporting Tamara as she builds her skills and develops her exciting project over the coming year.”

“We are delighted that Territorian filmmaker Tamara Whyte has been selected as the recipient of DAF’S inaugural Fellowship. We look forward to seeing Tamara’s career continue to thrive with the support of the Fellowship partners. This is another great outcome from the Centralised initiative”

“As a founding partner of the Centralised initiative, the SAFC is proud to support this Fellowship which boosts the incredible work being done by Aboriginal and Torres Strait Islander screen creatives in South Australia and the Northern Territory. I congratulate Tamara on her success and look forward to even more great outcomes from Centralised.”