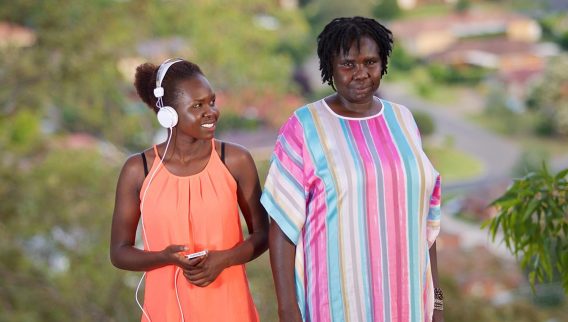 One family. Two wars. Three countries. What does it take to forge a new life far from home?

Brave, lion-hearted, charismatic Constance, mother of six, confronts her painful past in war torn Sudan, and risks everything in Australia so her family can thrive.

Mary, Constance’s niece, finds it impossible to find a job. Vicky, her daughter, studies every morning from 4am, hoping to get into university. Charles, 23, is struggling with alienation and depression.

Constance on the Edge gets to the heart of a contemporary untold story about the courage and resilience it takes to build new lives. The film also highlights the important role communities play in encouraging a sense of welcoming, healing and belonging.

• Digital Screening Kit on how to make your screening a success

• Digital artwork for invitations and posters

• An ‘Action Toolkit’ for audiences

• A link to specially designed digital curriculum materials for Health and Physical Education; English, History and Geography targeted at years 9-12

Constance on the Edge’s Action Toolkit

Constance on the Edge was one of seven documentary films selected for the 2014 philanthropic Good Pitch2 Australia initiative. Good Pitch brings together filmmakers with foundations, not-for-profits, campaigners, philanthropists, policy-makers, brands, educators, broadcasters and media to forge powerful alliances around ground breaking films that will have a significant impact in relation to issues of social importance – and benefit the partners, the development of the films and society as a whole.

With stakeholder partnerships developed and resources raised through Good Pitch2, the Constance team produced an impact campaign to accompany the film’s release.

• Constance on the Edge is a film about refugee resettlement, and what it takes to belong in a new community. The film highlights how simple everyday acts of welcome and assistance from community members, organisations and institutions can make all the difference to how refugees settle in Australia.

• Ensure the film is seen by a broad national audience;

• Promote the provision of better support services and job opportunities for people with refugee backgrounds.

• Established, well-maintained and informative website: The Constance on the Edge website contains the film’s trailer, synopsis and screening hosting information. It also contains an Action Toolkit and educational resources.

• Materials were also created to assist hosts in organising and running successful screenings. These materials included a Screening Kit, Discussion Guide and Action Toolkit, together with digital resources such as event run sheets, on-screen slides and trailers for social media.

• The team also maintained an active Facebook presence, and established a regular online newsletter to their subscriber list.

• The team produced employment-specific clips for their partner, the Settlement Council of Australia, to utilise in their ‘Employment Innovation Forums’ involving people from government, business and the settlement sector. The forums were aimed at promoting a cross-sectoral approaches to improving employment outcomes for new arrivals.

• The team additionally created clips for Humanitarian Hub training for volunteers working with asylum seekers, and produced an antenatal specific clip for use in hospital antenatal wards which they are in the process of trialling.

• Constance has been a finalist in the Australian Migration and Settlement Awards, in the category of excellence in journalism.

• Increase in community awareness regarding the issue of refugee resettlement in Australia. This was measured through a survey, via the screenings.

•  Increase in support and action in welcoming refugees in communities.

•  Change in community attitudes towards challenges facing refugees in Australia. This was also measured through a survey.

Visit Constance On The Edge